Gordon Johnson Houghton is a quietly spoken, modest, shy and almost reticent horseman. His reserved demeanour provides no clues whatsoever to his illustrious equestrian background, and the history of his family. However it is this very inoffensive and almost subdued approach that the horses he treats respond to without objection. Everything is done with the minimum of fuss and the maximum simplicity. It is this natural empathy with horses that led him from race riding and training to becoming a McTimoney-Corley Animal Practitioner.

Born in 1965, Gordon is the son of the legendary racehorse trainer Fulke Johnson Houghton, and the Grandson of Major Gordon Johnson Houghton who served with the great philanthropist and former Senior Jockey Club Steward, Lord Leverhulme. Fulke Johnson Houghton trained champions Ribofilio, Rose Bowl, Ile de Bourbon and Double Form, as well as many notable winners for Lord Leverhulme. These included Hot Grove, who won the Chester Vase by five lengths before running The Minstrel to a neck in the Derby in 1977. It was against this background that Gordon grew up and, not surprisingly, pursued a career in Racing having first completed his education at Eton and Bristol University, gaining a BSc(Hons) in politics.

An all-round horseman, Gordon produced a novice horse through the levels that was subsequently listed for the Young Riders European Three Day Event Squad in 1983. During his race riding career Gordon also rode forty two winners both on the flat and over fences, not only in the UK but also in Italy and Ireland.

From the mid- eighties through to the late nineties Gordon worked as an Assistant Trainer, with such iconic names as Jenny Pitman, Nicky Henderson, Tom Jones, Arthur Moore and Jim Old, gaining as much knowledge as he could before later working as a Trainer in his own right.

His huge love of horses means that he has never been far away from horses and he has always relished spending time with them, despite spending some intervening time working in the City due to family commitments. This lure ultimately proved to be too much and, despite the glitter and attraction of the City, the countryside and horses proved to be too deeply embedded in his psyche. This led Gordon to qualifying as a practitioner of the McTimoney-Corley method.

Since 2006 Gordon has actively practised in Suffolk and the surrounding counties. Often travelling great distances to treat loyal clients who have moved out of the area. With his knowledge of all aspects of horse management Gordon is able to bring wide experience to his patients. With his understanding of fitness and training regimes, he is able to pinpoint causes and suggest management methods that maximise the horses ability to recuperate and sustain their potential.

McTimoney-Corley Animal Therapy is a method of restoring health by the gentle corrective manipulation of the bones of the head, spinal column, pelvis and limbs, thereby ensuring the proper functioning of the nerves and endocrine systems which control the natural self-healing capability of the body.

Should your horse be displaying any of the following symptoms, they may be indicative of an underlying problem that requires Gordon's attention. 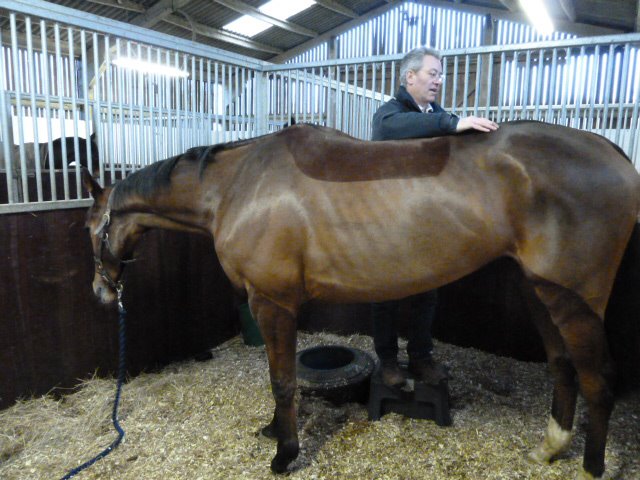 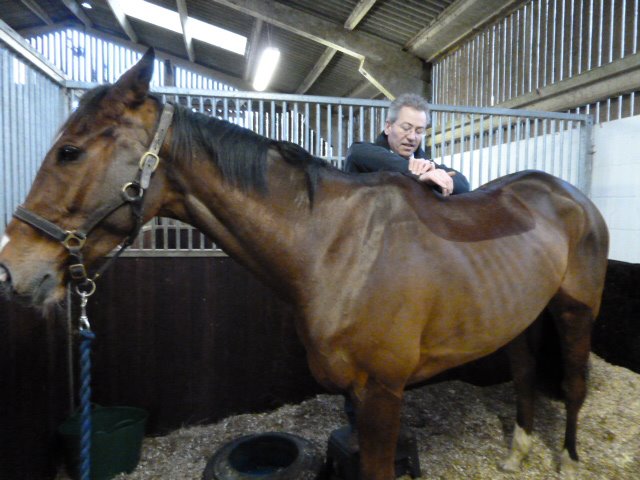 A horse in training being treated by Gordon only a few days after running. You can see the horse is so concerned about what I'm doing he's not even held!